This bias cutting technique has actually been around for quite some time. It wouldn't surprise me if it was something Mary Brooks Picken discovered all on her own when she assisted with the writing and publication of the old Singer Sewing Book. It's a simple trick, really, and makes use of small pieces for fabric conservation!

Sometimes I have a little piece of fabric leftover from a project, but not enough to cut long strips for bias trim - and it would be tedious to sew several small strips together. Other times I want to conserve every last fiber of yardage because of the fabric rarity or cost. I have a feeling I will be using this technique often for my Liberty remnant prints! Accuracy is very, very important, and can make a difference in the end result, so be sure to cut the short (straight-grain) side and bias side very straight like you see in the photograph below. Now you can draw your bias lines using the measurements on your cutting mat. Whether you want bias that measures 1 inch, 1.5 inches, etc.... with a fabric marking pen, you can use the straight lines on the grid as your guide to mark parallel bias-cutting lines. On the back side of the fabric piece measure and mark your bias strips to your desired width. It does not matter what width you prefer, this technique is applicable for any bias width desired. Taking the Singer Sewing Book technique one step further, on one *straight-edge side*, make a mark 1/2-inch on either the right or the left side (it doesn't matter which) of each bias line. In the photo above, I made my marks 1/2-inch to the left of each bias line. After you make your 1/2-inch marks, transfer them to the right side of the fabric so you can easily see them when you align right sides together in the next step. Begin matching right sides together with the two straight-edge sides. Make sure that you have one full bias width (as indicated by the pen in the photo above) that will NOT get stitched... simultaneously aligning the bias lines on one straight edge side to the 1/2-inch marks you made on the other straight edge side as you will see in the next photo. When you bring the straight-edge sides together it will seem a bit awkward, but this is normal.

NOTE: You will need to have one full width of bias (which will NOT get stitched) on at least one end when you pin it together as indicated by the previous two pictures in the tutorial. Stitch the two straight ends together using a 1/4-inch seam allowance. Again, being precise is very important.
Notice the red stitching in the photo above? I stopped just short of the last full width of bias. There is now a full bias width that was not stitched as indicated in previous photo instructions. (the extra little width on the right side is just excess and will get cut off) Using a pressing ham or rolled towel, insert it into your fabric tube and press the seam allowances open. Beginning with the side edge that has your un-stitched full-bias width, begin cutting following the bias line that you marked. You should just keep cutting with the lines essentially forming one continuous path. Trim any excess.
My 8 x 18 inch fabric piece yielded 82 inches of one-inch bias!

This is exactly the way my mum taught me how to make bias. It's so easy and uncomplicated, thanks for the refresher course.

April... thank you for always putting forth 110%. When I look at all the sewing information that you make available for free I am always so touched... It seems you understand all the layers of sewing and really know how important that they really are and you make sure that they won't be forgotten... thank you!
Gwen

I love this method! It took me 4 blog articles and 3 youtube videos but I finally got it!

Thanks for posting this. This method is so much easier than the method I have been using.

I am curious how wide you would cut the bias strip if you want to use the binder foot to fold it and sew it?

Thank you for putting so much detail into your tutorial. Though I have seen this emthod mentioned elsewhere, your instructions are the first ones to create a fool-proof result. I so want to be wise using my fabric stash. :)

Have I told you lately that I love you? Thanks again for this tutorial, friend!! 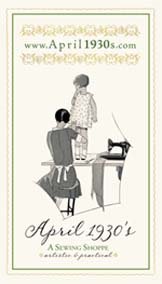